Last week I had hoped to tell you about the different things we did whilst staying at the yurts but time passed quickly and I didn't get the chance. I was going to tell you about when we went swimming in the sea. It got me thinking, I've managed to go sea swimming a few times this summer.


You would think living in London I wouldn't get much chance for sea swimming but as the tv show says 'You're never more than 75 miles from the coast in Britain'. The first time I went swimming in the sea this summer was in the first week of the school summer holidays. My friend Kate and I drove to the pretty sea side town of Whitstable. Kate was nervous about swimming in the sea but once she was in she loved it. We enjoyed the peace of the shingle beach, eating our picnic and swimming in the sea so much that we went back again two days later. 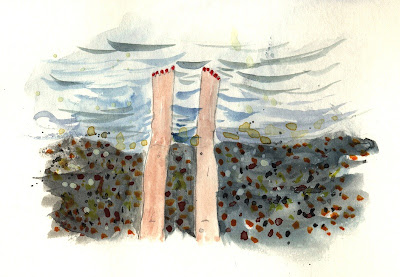 The next time I was sea swimming was a couple of weeks later. Daniel and I went on holiday to Spain. The sun was so hot that we would go into the sea to cool down, unlike plucking up the courage to brave the cold water in England. We lazed around on the beach. I painted watercolours of shells, read Roger Deakin, and we swam together. Bobbing up and down in the waves with Daniel next to me, looking up at the blue sky and the birds flying overhead. 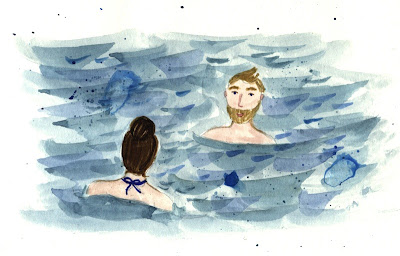 I thought I'd had my share of sea swimming for the summer but last weekend was sunny and the seven of us decided to go swimming in the sea. We packed ourselves into our friend's tiny car (me in the boot!) and drove to the nearest beach. We arrived and walked over to the sandunes. To my surprise everyone was so keen to get straight in the water. No standing around plucking up courage. They all ran into the sea. 'I think it's the ultimate relaxation' my friend Chloe told me. I took a few photos and quickly followed. It was cold! But oh so wonderful. I was swimming and looking at our friends around us. I don't remember swimming in a group like that since I was a child with my brothers and friends. It felt so good. We were smiling. 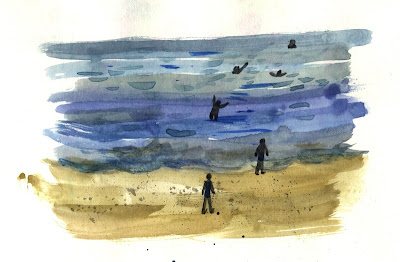 I think I've had my share of sea swimming for this year, but we are having a heatwave (summer dresses and sandals in October!) so you never know . . .